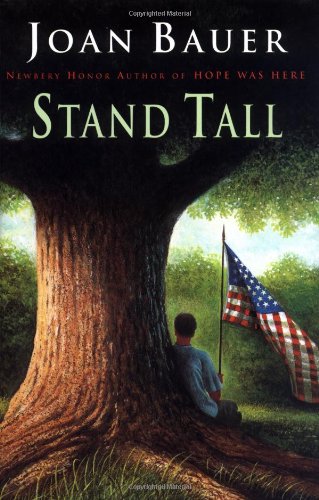 In her heartfelt and humorous novel, Bauer () leaves teenage girl protagonists in favor of a middle-grade boy—as she did also in (1996). But her fans won't be disappointed. At first, 12-year-old Tree, "six feet, three and a half inches and growing," only literally "stands tall." At school, Coach Glummer expects him to lead the basketball team (though he's not very athletic) and teachers expect him to act older than his age. On the home front—which shifts weekly due to his parents' recent divorce and joint custody arrangement—Tree is the glue of his family. He helps care for his Vietnam vet grandfather (who recently had a leg amputated) while worrying about his aging dog, Bradley, his two college-student brothers and his parents. Bolstered by his budding friendship with the outspoken new girl at school, Sophie, and by Grandpa, Tree finds an inner strength that helps him deal with just about anything—including a natural disaster. Bauer once again creates a clan of believable characters scrambling to make the best of their particular brand of dysfunction. Her swiftly paced story artfully blends poignant and outright funny moments, resulting in a triumphant tale that will resonate with many young readers. Ages 10-up.