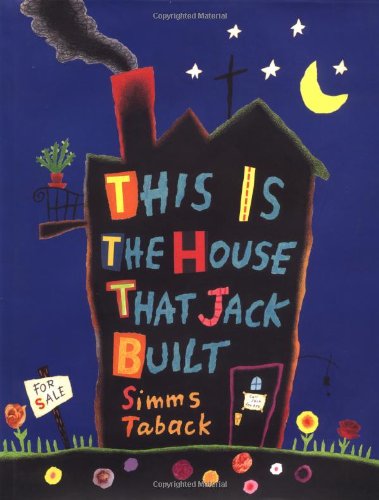 THIS IS THE HOUSE THAT JACK BUILT

Caldecott Medalist Taback () offers a spirited interpretation of this cumulative rhyme. From the very start—as endpapers reveal a variety of pencil-drawn houses with yellowing real estate ads as captions—the artist fills these busy pages with abundant details and diversions. The first spread introduces Jack's home on the left, with the text on the right, and the word "house" in eye-popping collage type. Ancillary images and asides accompany the vividly hued mixed-media illustrations and hand-lettered text that introduce the invading characters. On the spread announcing the cheese, for example, Taback reveals nine varieties (one of which "lay in the house that Jack built") and ranks them according to their pungency ("Not so smelly"; "Really stinky"). Superimposed on the image of "the cow with the crumpled horn" are labels indicating its parts (tail, hoof, udder) as well as the anatomical sources of some kid-pleasing delicacies (meatballs, Big Mac, etc.). As previous characters move to the right of each spread, they (and the growing text) begin to crowd out the house itself. Taback slips himself into the tale at its end (wearing a beret bearing the words "Guess who?"), applying the finishing touches to a picture that gathers the entire cast of characters. A zany and fun take on this 18th-century classic. Ages 4-8.