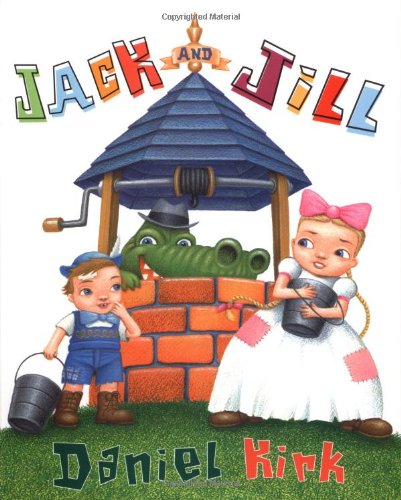 Kirk () expands a nursery rhyme into a convoluted tale of a single-parent family and a wishing well. Jack, in blue lederhosen, and blonde Jill, in a flouncy dress patched with pink squares, look every bit the storybook urchins. Apparently they have had some hardship; their house is in disarray, their mother does the vacuuming in a ball gown and framed family photos imply their father's absence. Even the kitchen sink is broken, so their mother carelessly sends them up the hill to fetch a pail of water: "It's true your father vanished/ when I sent him out for water..../ But that was quite a while ago!/ Run along, my son and daughter!" The siblings discover that the well is guarded by a talking crocodile, and in his surprise, "Jack fell down and broke his crown.../ By which I mean " The magic croc demands that they make wishes, and Jack blurts, "I wish that Dad were here to help us now." When the smoke clears, the reptile is gone and their father tells them they have broken a witch's spell. Kirk foreshadows the croc's identity by giving it the father's gray felt hat, and he sticks an incongruous green tail on Dad for good measure. His big-eyed characters and grainy, color-saturated images recall the lithographs in the original Golden Books. His stiff, retro artwork parallels the accuracy of the "Jack and Jill" rhyme scheme, and this stylization keeps readers at a distance throughout the revisionist tale. Ages 4-8.