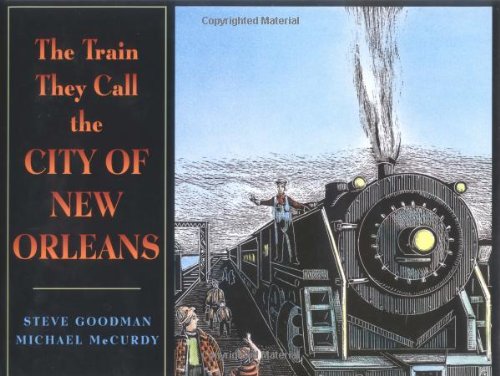 THE TRAIN THEY CALL THE CITY OF NEW ORLEANS

Parents of a certain age may have a hard time not singing this book's verses, written in 1970 and immortalized by Arlo Guthrie. But it's McCurdy's () signature scratchboard-and-watercolor illustrations, set in what seems the late '50s, that will likely win over their progeny. First, the artist establishes context with a map of all the train stops from Chicago to New Orleans. Then, using abundant black with elaborate cross-hatching, he creates highly dramatic and compelling scenes within and without the train on its journey south. He grabs the audience's attention right from the start, showing a child who looks directly at readers as his family boards the train: "Riding on the City of New Orleans/ Illinois Central Monday morning rail/ Fifteen cars and fifteen restless riders/ Three conductors, and twenty-five sacks of mail." Other intriguing scenes show children at work with their engineer and Pullman porter fathers. At times, however, the ode to train travel may be problematic for young ears (e.g., a group of card players "pass the paper bag that holds the bottle"), or be hard to understand ("But all the towns and people seem to fade into a bad dream/ And the steel rail still ain't heard the news/ .../ This train's got the disappearing railroad blues"). This nostalgic trip may have more mileage with adults, but youngsters will appreciate this romantic vision of the rails at their peak. Ages 5-up.