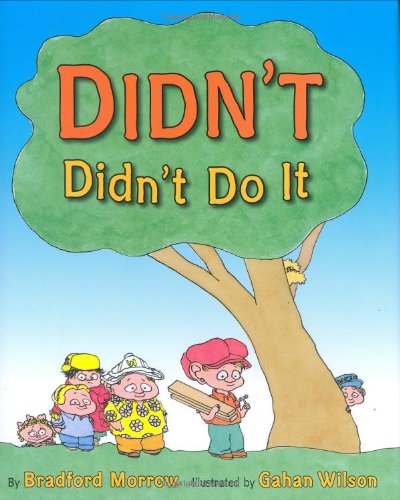 Didn’t Didn’t Do It

orrow, an O. Henry and Pushcart Prize winner making his children’s book debut, and veteran cartoonist Wilson ( ) engage in some nifty word play reminiscent of the classic bit “Who’s on First.” A group of children set out to build a treehouse, but “it never got done.” Why? First, a family of cute birds already occupied the tree. And second, the children’s unusual names—Didn’t, Doesn’t, Shouldn’t, Couldn’t, Wouldn’t, and Can’t—seem indicative of an inability to move forward. The story and silliness unfold when two children first spot the birds and agree to abandon their portion of the construction: “Didn’t didn’t do it. Neither did Doesn’t. Doesn’t didn’t do it because Didn’t wouldn’t.” (The contraction names are set in colored type to distinguish them from the regular contractions that appear in the text. Additionally, the colors match the children’s clothing, helping keep the characters’ identities straight.) Can’t soon follows suit, Wouldn’t and Shouldn’t fight over tools, little Couldn’t eats the plans, and pretty soon everyone realizes they’d be much happier just sitting on a branch surrounded by their feathered friends. Wilson’s loopy, oozy cartoons keep the merriment moving along—as always, his kids appear to be 6 and 76 simultaneously—but the real fun is in watching words collide. Ages 5-up.