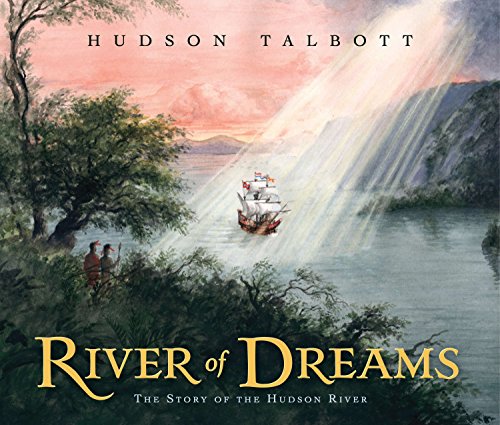 River of Dreams: The Story of the Hudson River

Putting his powers of visual explanation to the test, Talbott ( ) presents a staggering amount of information about the Hudson River without ever overwhelming or confusing readers. A series of watercolor spreads, unified by the image of the river flowing across each one, traces the Hudson’s role in the colonization of New York, the Revolution, the era of steamboats, the building of the Erie Canal; its fate as railroads eclipsed shipping’s importance; its environmental degradation; and its rebirth. The image of the river often doubles as a timeline, helping to organize the information and make room for extra details. Side tours explore the river’s literary and artistic history. Striking trompe l’oeil devices enliven many of Talbott’s paintings; on one page, a locomotive appears to hurtle “full steam ahead” through a bucolic river scene toward the viewer, a terrific visual pun on the railroad’s social and economic effects. Talbott makes good use of irony (the Native Americans’ stewardship of the Hudson River Valley “was great while it lasted”), but does not avoid emotion (immigrants at Ellis Island represent “another river.... a river of dreamers”). Ages 6–8.