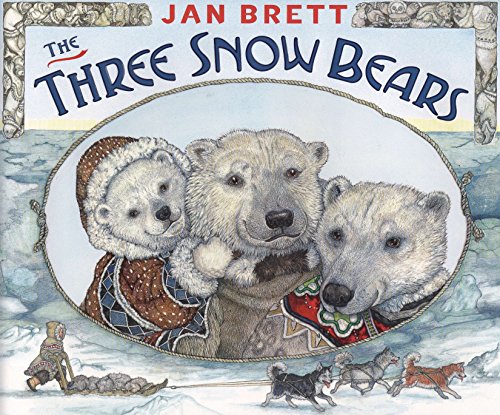 The perennially popular Brett sets this wintry spin on the Goldilocks tale in the Arctic. A polar bear family leaves its igloo for a walk to let Baby Bear’s soup cool just as Aloo-ki, an Inuit girl, runs past, searching for her team of huskies, which have drifted away on an ice floe. Distracted by the aroma of the soup, Aloo-ki wanders into the igloo, and the rest is (not quite) history. Set against a background rendered as chilly blocks of ice, Brett’s trademark border panels unfold the simultaneous story of the bears, who rescue the stranded dog team even as Aloo-ki makes free with their breakfast and home comforts. Kids will enjoy the variations on a nursery room standard, although the main draw is, as usual, Brett’s characteristically detailed art. She pays loving attention to folkways, attiring the bears and other animals in furry parkas with geometric Inuit designs and furnishing the igloo with implements crafted in a native style. But between the frigid tones of the icy borders and the minor key of the story, the volume is narrower in its appeal than Brett’s ( ) best. Ages 4-up. ( .)