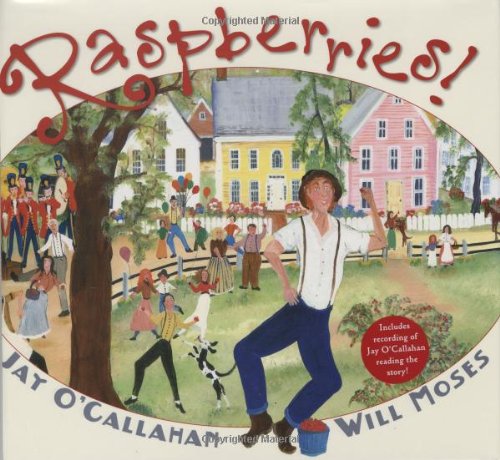 In a tale with the scope and ambition of a novel, O'Callahan ( ) tells a pay-it-forward story about a failed baker, Simon, and his comeback. At Simon's lowest moment, after his second business goes up in flames, he's given a handful of dried raspberries by Sally, a poor woman whose family he had helped in better days. The village baker helps Simon make tarts with the raspberries that grow miraculously from Sally's gift. The tarts have a magical effect on anyone who eats them, from Old Mrs. Oddbones, “bent as a hairpin,” to Lucy Wooly, the town bully: every person who eats them begins to leap and dance, yelling, “Rasssssspberrrrrrrieeeeees!” (For emphasis, the word is set in curvy red script each time a character shouts it out.) Simon's reputation is restored, and his red hair, which he's been hiding under a hat, “shot up like firecrackers.” Moses's ( ) naïve spreads capture an America of saltbox houses, flour sacks, horse carts and bunting on the village bandstand, while O'Callahan's enthusiasm, humor and sincerity point to the transformative power of kindness. Ages 3–5.