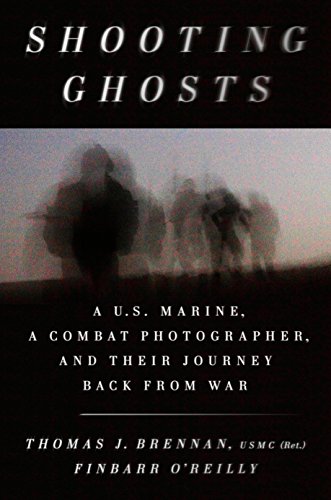 In this well-written account of dealing with war trauma, a still-taboo subject for many in the military, Brennan and O’Reilly, a retired Marine Corps sergeant and a battle-hardened photojournalist, respectively, confront the manner in which they were consumed by the hell of warfare and saved by the power of words and pictures. In Afghanistan’s Helmand Province, Brennan methodically goes about his work killing Taliban insurgents and, while serving in Iraq, children who get in the way. O’Reilly was driven in his own way in covering African wars and civil strife in Congo, Libya, and elsewhere. While embedded in Brennan’s squad in Afghanistan, O’Reilly photographs the wounds the sergeant suffers after an explosion. Their lives now linked, when the shooting stops and the blasts end for them, neither man can survive his respective trauma without treatment. O’Reilly seeks help and receives it without much ado. But Brennan must navigate the Corps’s byzantine bureaucracy and the perverse machismo of fellow soldiers and commanders who disparage post-traumatic stress disorder as a weakness. Brennan and O’Reilly strip away any misplaced notions of glamour, bravery, and stoicism to craft an affecting memoir of a deep friendship—one that nourishes their will to survive the memories of horrors that most noncombatants will never fully understand. Agent: Stuart Krichevsky, Stuart Krichevsky Literary. (Aug.)