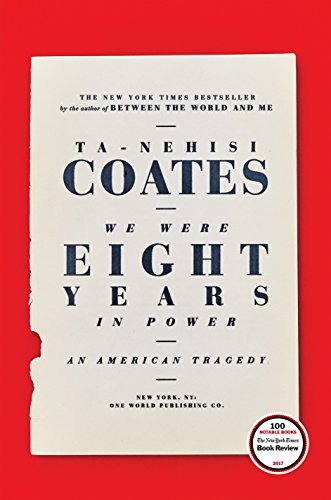 We Were Eight Years in Power: An American Tragedy

National Book Award-winner Coates (Between the World and Me) collects eight essays originally published in the Atlantic between 2008 and 2016, marking roughly the early optimism of Barack Obama's presidency and the 150th anniversary of the end of the Civil War. The selection includes blockbusters like "The Case for Reparations" and "The Black Family in the Age of Mass Incarceration," which helped to establish Coates as one of the leading writers on race in America, as well as lesser-known pieces such as his profile of Bill Cosby (written in late 2008, before the reemergence of rape allegations against Cosby) and a piece on Michelle Obama before she became first lady. The essays are prefaced with new introductions that trace the articles from conception to publication and beyond. With hindsight, Coates examines the roots of his ideas ("Had I been wrong?" he writes, questioning his initial optimism about the Obama Administration) and moments of personal history that relay the influence of hip-hop, the books he read, and the blog he maintained on his writing. Though the essays are about a particular period, Coates's themes reflect broader social and political phenomena. It's this timeless timeliness--reminiscent of the work of George Orwell and James Baldwin--that makes Coates worth reading again and again. (Oct.)

This review has been corrected; an earlier version said he won the Pulitzer Prize, for which he was nominated; in fact he won the National Book Award.