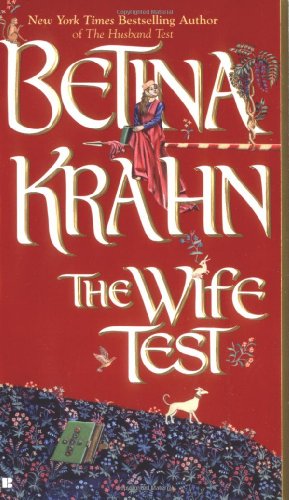 When a medieval-era nobleman needs to ransom himself but hasn't the funds, where can he turn? If he's the French Duke of Avalon, he asks the Convent of the Brides of Virtue, which has enjoyed the benefits of his protection, to deliver four marriageable "daughters" to King Edward. So begins this witty, rollicking romance between spunky Chloe of Guibray, a beauty with a questionable lineage, and the ill-tempered Sir Hugh de Sennett. Determined to uncover her mysterious English roots and see her friends happily wed, Chloe maneuvers her way into the group being sent to the king and devises "the wife test" to evaluate the best match for each lady. All would go well were it not for the stern presence of their escort, Sir Hugh, a rigid, pious knight whose ill will toward womankind is notorious. But even as he struggles to resist Chloe's charms, circumstances conspire to throw them together. Toss in reluctant bridegrooms, fractious brides and a murder attempt or two, and the course of true love runs far from smooth. The assorted maidens are types, not rounded characters, but Chloe has enough moxie to compensate for the lot of them. Despite a slow start, Krahn's amusing follow up to quickly blossoms into a bright, exciting adventure.