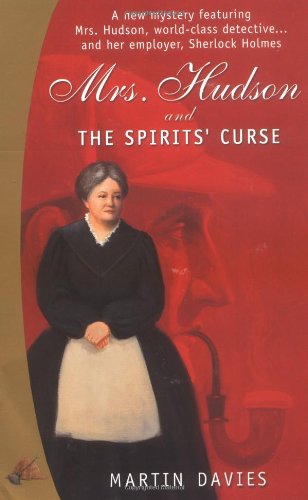 MRS. HUDSON AND THE SPIRITS' CURSE

BBC producer Davies draws many details from Conan Doyle's Sherlock Holmes adventures for his first novel, a lightweight pastiche narrated by Flotsam (aka Flottie), a 12-year-old orphan girl, and starring Mrs. Hudson, housekeeper extraordinaire, who becomes an unlikely crime solver after rescuing Flottie from the streets. Highly agitated Nathaniel Moran appears at 221b Baker Street seeking protection from unknown assassins who have pursued him from Sumatra, where he and his partners ran a trading business until five members of the firm were mysteriously slain. Despite their bankruptcy, Moran and his fellow survivors are able to afford fine London hotels and apartments. Holmes, Dr. Watson, Scotland Yard, Mrs. Hudson and Flottie all look into the possibility that the Pagi, or spirits' curse imposed by tribal priests, is the cause of these misfortunes. Soon associates of Moran are found dead of such causes as bites from exotic poisonous snakes and tarantulas, and Watson goes on "a tramp across the moors" to interview Moran's father. Some confusing shifts of speaker and repetitive descriptions of foggy London may disturb some readers, but most should be won over by this affectionate homage.