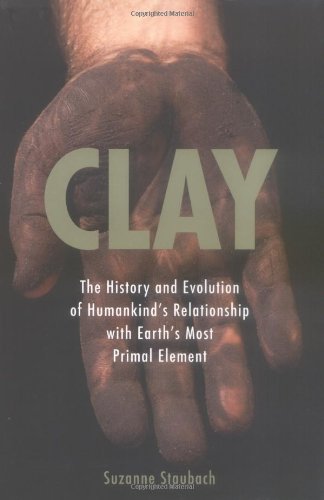 Clay: The History and Evolution of Humankind's Relationship with Earth's Most Primal Element

Staubach, a potter and freelance writer, successfully communicates the passion she feels for her material (both literal and literary) in this extensively researched overview of clay. What is this ubiquitous stuff? It began as granite, which over millions of years was ground down by rain, sleet, snow and chemical forces into what we now know as clay. The first known clay objects were small religious figures, followed by pottery vessels, in Neolithic times. The oldest such pottery known was produced by the Joman peoples of Japan. In addition to an informed discussion of clay ovens used by various cultures over time, the author compares these cultures' designs as pottery grew to be an art form. Ancient Greeks, for example, created a unique appearance by controlling the atmosphere of their kilns. Clay, Staubach says, has served many purposes: clay tablets were used for the earliest writing; it also became the key ingredient for building houses and, in modern times, sewer pipes and flush toilets. Some sections of this account will be of most interest to potters, pottery aficionados or those with an interest in earth science, but Staubach leavens her facts with captivating anecdotes throughout. Photos.