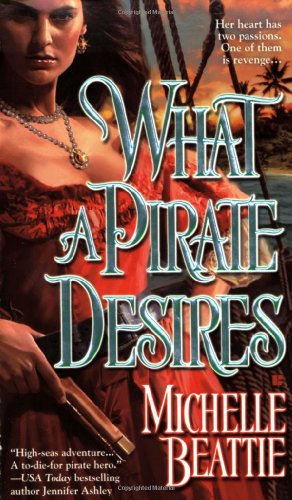 What a Pirate Desires

Beattie’s debut, a 1660s Caribbean pirate romance, is heavy on swashbuckling and light on character development. Five years before, a brigand called Dervish killed Samantha Fine’s family. She and her friend Joe escaped the massacre, but wound up enslaved by an evil plantation owner, so they stole his ship and turned pirate, with Sam cross-dressing as Capt. Sam Steele. Now she’s decided to break one-eyed pirate Luke Bradley out of jail and get his help finding Dervish When sparks fly between Luke and Sam, she fears he will break her heart—he’s a pirate, after all—and he believes she’s too good for him. This very traditional but fun romance features a feisty heroine, a tortured hero and a sassy parrot along with strong doses of betrayal, action and plenty of cunning.