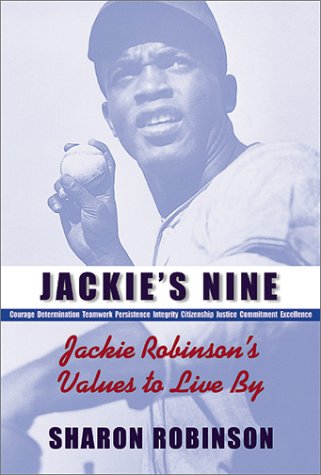 Robinson pays tribute to the values that she believes exemplified her father's life in this rather choppy collection of pieces, the majority of which have been published in earlier books. In chapters devoted to each of these nine principles (courage, determination, teamwork, persistence, integrity, citizenship, justice, commitment and excellence), she includes an entry by or about her father, a recollection of what she considers a memorable event in her own past and an article by or about an individual from among what she describes as her "heroes… courageous men and women who have touched me personally." Entries in this last category include an excerpt from Christopher Reeve's autobiography, a portion of Bruce Markson's biography of Roberto Clemente and an excerpt from Martin Luther King Jr.'s . The author draws extensively from her father's , an autobiography as told to Alfred Duckett; as well as her own , published in 1996. The result feels a bit cobbled together; through the amalgam of voices, it is Jackie Robinson's, rather than the author's, that emerges as the most compelling. Still, middle graders may well find inspiring the life and words of this first African-American major-league ball player and Hall of Famer. Ages 10-up. ()