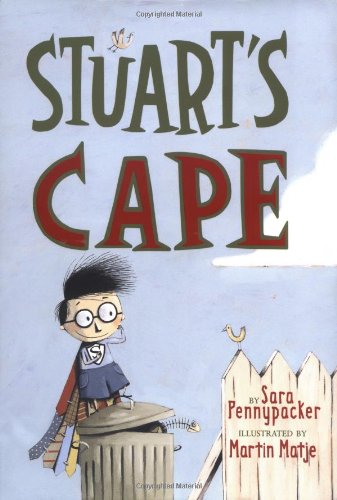 Pennypacker's () winsomely warped tale introduces eight-year-old, woe-is-me Stuart, whose family has just moved to a new town. The boy feels anxious about many things, including his new house ("What if there were man-eating spiders in his new bedroom closet? Or, a man eating spiders?"); getting locked inside the bathroom of his new school; and the possibility that no one in third grade will want to be his friend. "Stuart was very good at worrying. He was not so good at waiting." Impatient for adventure, Stuart suddenly realizes, "Adventures only happen to people with !" He fashions his own by stapling together 100 old ties and the adventures begin. The funniest scenario involves the cape-draped lad's realization that he can fly—but he can't land until his aunt makes a giant slingshot and sends him a pound cake to weigh him down. Most preposterous is the final episode: after Stuart's parents forbid him to wear his superhero gear on school orientation day, his cat falls asleep on his cape and ends up switching identities with the trash collector—but the upshot is realistic (Stuart makes a friend). Matje's () pen-and-ink spreads and spot illustrations (a standout shows Stuart racing across the top of a spread, his cape-of-ties sailing behind him) amplify Pennypacker's quirky humor. The wry tone may be lost on some readers, yet others will happily escape with Stuart as he embarks on his confidence-building flights of fancy. Ages 6-9.