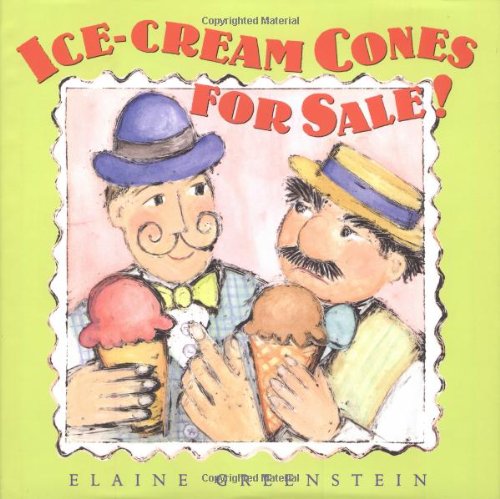 Greenstein () offers a beguiling introduction to the art of historical sleuthing with a can't-miss subject: the invention of the ice cream cone. At the 1904 World's Fair in St. Louis, she writes, "There were more than fifty ice-cream sellers... and, they say, a lot of waffle-makers. At some point, the two came together to form an ice-cream cone. But who came up with the idea first?" The scratchboard-like gouache tableaux that lay out her search for the answer take on the light, confectionary feel of their subject; the competing St. Louis claimants appear on a proscenium stage, like contestants in a beauty contest. But Greenstein's purpose and method is quite serious. She weighs evidence, demonstrating that historical documentation can often be untidy, carefully labels any conjecture on her part and includes a closing bibliography. Ultimately, she presents the winner as someone who does not appear in the onstage line-up (Italo Marchiony, a New York City vendor was awarded the patent for the ice cream cone mold in 1903), but even readers who voted for one of the early contenders will appreciate the author's imagined scenario of how Marchiony came up with his invention. Scrupulous to the end, Greenstein points out the distinction between Marchiony's "wafer" cone, as it is now popularly called, with its flat bottom, and the pointy St. Louis cone—aka the "sugar" or "waffle" cone. This tasty narrative treat could well prove delicious inspiration for current and future writers of history reports. Ages 4-8.