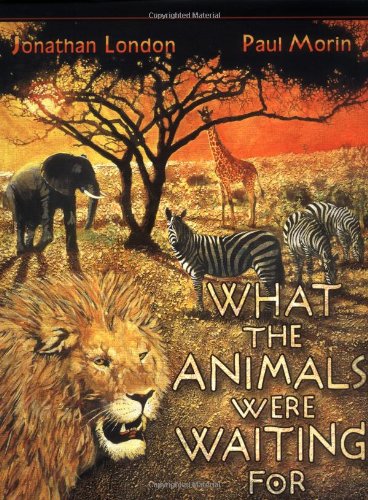 WHAT THE ANIMALS WERE WAITING FOR

This overambitious volume explores the passing of a difficult season on the African savanna. Both the story and the art unfold on two levels. London, previously paired with Morin for , divides his text between a second-person narrative (printed in roman type) and dialogue (in italics) exchanged by a Maasai grandson and grandmother: "You are Maasai," London begins, "You stand on one leg, like a stork, in the sun.... , says Grandmother." As the second-person voice describes the parched land and the apparent "waiting" of the animals, the boy asks, repeatedly, "" and is told "" The answer comes in the form of rain, occasioning the land's renewal and the animals' migrations. Close-up mixed-media art shows the animals in the glittering, oppressive heat; sticks and sand incorporated into paintings add not only texture but a sense of the desiccation of the land. Many spreads include small color photos of animals or people, and a decorative band snakes across most pages, too. Given the complicated narrative structure, readers may be too busy trying to figure out what is going on to enter the actual story, but the realistic paintings of the animals at rest and in their final stampede will captivate youngsters. Ages 6-9.