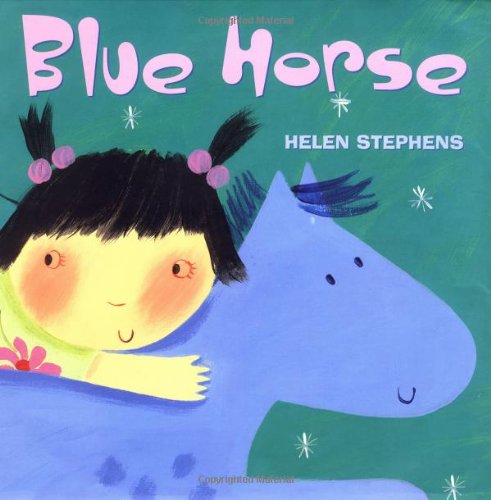 Tilly finds that it's not easy being shy and a new kid in town, "so she stayed inside and played all by herself." But her strategy has its drawbacks: "When she played soccer... no one kicked the ball back." Things look up considerably when Tilly's stuffed toy Blue Horse reveals it can talk. The two embark on fun-filled games of pretend that shore up Tilly's confidence and make the most of Stephens's () naïf-styled, pastel illustrations. In one spread, Tilly and Blue Horse imagine they are brave in the face of a monster movie; Stephens creates a stylized dragon from cut-out paper, then fills it in with broad brushstrokes of bright green that look as if they've been applied as finger-paint. The anxiety so effectively conveyed in Tilly's tiny eyes throughout the opening pages evaporates in these flights of fancy, and it takes only a little nudging from Blue Horse for her to talk to a solitary girl she spots outside her window (who, as it turns out, is keeping company with a make-believe friend of her own). A final playground scene brims with kids and their "special friends"— including a seesawing ghost and a giant soccer-playing rabbit. A pleasing statement about imagination as a source of comfort and courage. Ages 2-5.