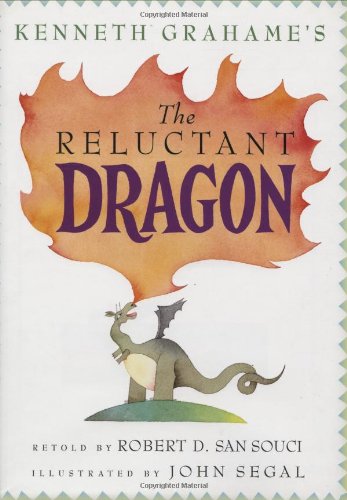 For this elegantly designed volume, San Souci ( ) breathes new life into the sword-and-scales genre with a snappy adaptation of Kenneth Grahame's 1898 short story. The book stars a most unusual dragon who prefers poetry, pacifism and singalongs to murderous pillaging and destruction ("I'm too lazy to make enemies"). Jack, a shepherd's son, befriends the dragon, but his fellow villagers see the fiery beast as "an enemy of the human race" and call in Saint George. Smart-thinking Jack convinces George to talk to his friend, and together they concoct a scheme to stage a battle so the dragon can be saved. The faux fight is deliciously scary ("The dragon, enjoying the drama, reared and roared and rampaged"), but young fantasy fans will enjoy both the ruse and the happily-ever-after resolution. Matching the text's dynamism, Segal's ( ) illustrations seem a happy cross between medieval manuscripts and comic book panels. Narrow rules frame each page, accentuating the oversize vertical format, while Segal's small, cartoon-like illustrations captioned with phrases from the text float in a sizable white background. The less-is-more sensibility of the design offsets the somewhat insistent message about looking beyond appearances and overcoming prejudice. San Souci's fluid storytelling gives the story a modern feel, and Jack's peaceful problem-solving sets a winning example. Ages 5-9.