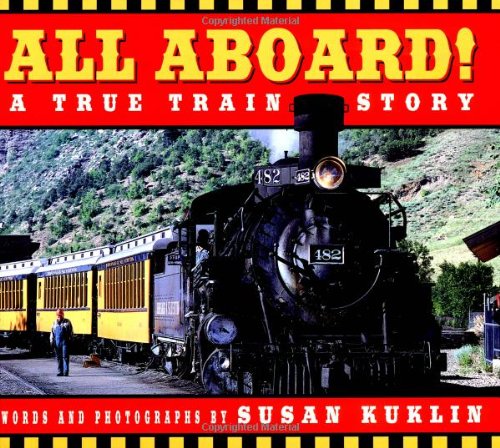 ALL ABOARD! A True Train Story

Kuklin's ( ) photo-essay documents the passage of vintage steam locomotives (Durango & Silverton Narrow Gauges, to be precise) as they chug through the Colorado Rockies and across a series of crisply designed, strongly horizontal spreads. Brief captions trace the journey and drive home the sound effects: "Onto the trestle/ Over the river/ / Along the track" (all train noises are set in oversize, color 1890s-style type). Pages alternate from one bold color to another, while borders along the top and bottom of the spreads effectively echo train tracks. In Kuklin's most impressive photograph, the train snakes around a cliff at 7,200 feet above sea level, as sun glints off the striations and corrugations of rock. While the youngest trainspotters may be enthralled by the sight of a steam locomotive in action, older picture book readers may be less satisfied. The photographs do not coalesce into an effective narrative arc, and often—even in the cliff shot—the light casts such harsh shadows that the black locomotive is partially or totally obscured. A final spread offers various facts about the engine, including the meaning behind various train whistle patterns. Ages 4-8.