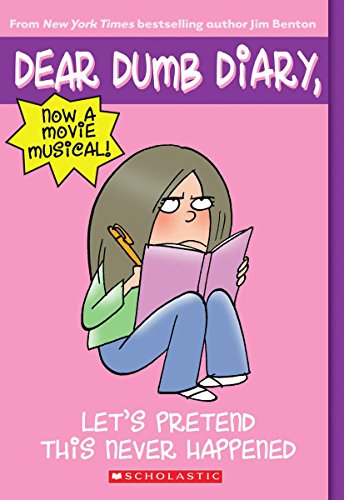 Benton's Dear Dumb Diary series gets off to a shaky start with this trite tale told in diary format. In daily entries, each starting with the title salutation, Jamie Kelly vents repeatedly on several topics. A die-cut cover shows the heroine, and when readers lift it, they get a preview of the themes to be introduced in the coming pages. The primary target of Jamie's tirades is her middle-school nemesis: pretty, popular, perky Angeline, who "is so perfect that the word 'perfect' is probably not perfect enough for her. One day they'll probably have to invent another word for her and when they do I hope it rhymes with vomit or turd because I think I have a good idea for a song if they do." Jamie also gripes about her mother's abysmal cooking (one night she makes "some sort of mushy noodley stuff... that tasted almost exactly like socks smell") and her less than luxurious locks, which she tries to dye Angeline's shade but instead it "came out the exact color of raw chicken." Though the feisty diarist makes the occasional funny observation, more often her stabs at humor miss their mark or are so protracted that the comic moment fizzles. Inane, sketchy illustrations do little to fortify the tale. Ages 8-12.