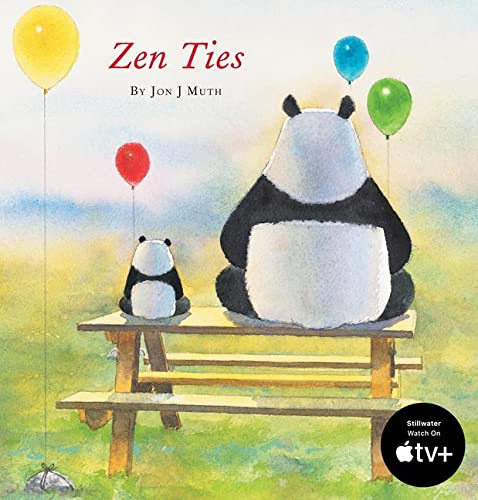 Stillwater, the giant panda who taught Zen parables to siblings Karl, Addy and Michael in continues to combine his slow-moving grace with genuine spiritual tranquility. This time, Michael faces a daunting spelling bee, and Stillwater, first seen wearing a necktie, introduces the three to Miss Whitaker, an elderly neighbor whose crabby outbursts have frightened them. Stillwater’s inward eye sees through her anger to her fear and loneliness. She turns out to be a marvelous spelling coach (“Just like plants, words have roots,” she tells Michael. “Roots of words can teach you to spell”), and when Michael wins a red ribbon, the pictures show the whole group sharing his victory with their own red ribbons—the “Zen ties” of the title. ( is Japanese for “the whole” or “the entire,” as in “all of us together.”) A subplot featuring Koo, Stillwater’s nephew, drifts a bit; he’s a cute little panda who punctuates the action with Zen-influenced haiku (and allows Muth another pun: “Hi, Koo!”). Muth’s brush is as sure as ever; Stillwater’s big, blunt paws and hunched-over listening posture are irresistible, and Miss Whitaker’s delicate face and snow-white hair beautifully counterpoint the vignettes of youthful play. From a religious tradition that makes no theological demands and that will be unfamiliar to most readers, Stillwater offers a model of pure saintliness, and children will instantly respond to him. All ages.