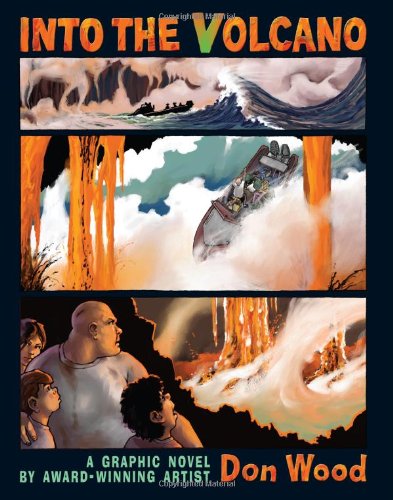 Wood's ( ) first foray into graphic novels is a visual stunner. Sumo and Duffy Pugg are called out of class by their father, who insists they immediately go off with their long-lost, oddly named cousin, Mr. Come-and-Go, to visit their (also unknown to them) Aunt Lulu on Kocalaha, the island where their absent mother was born. Blunt, bald and broad as a refrigerator, Come-and-Go does not inspire confidence in Sumo, the less adventurous of the brothers, and his reluctance looks reasonable when Lulu hustles them off on a mysterious expedition, which involves entering Kocalaha's volcano as it is erupting. Wood's full-color digital illustrations vividly depict fabulous scenery—lava flows, ocean swells, lush foliage—and the muscularity of the action will impress thrill-seeking readers. The boys repeatedly face peril, including a terrifying and surreal episode in which deathly specters surround Sumo while he tries to rescue Duffy. The plot does not answer all the questions it raises: the boys' trip is eventually explained, but not why their father has sanctioned it. The audience will likely be too busy living vicariously through Sumo and Duffy's ultimately excellent adventure to mind. Ages 7–up.