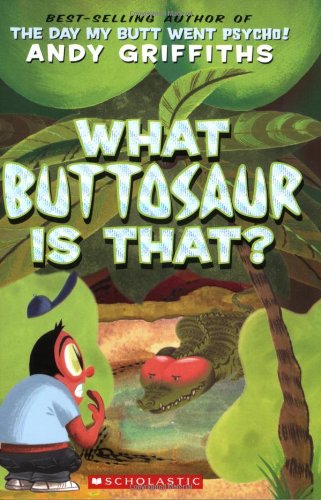 Griffiths’s ( ) book opens with a warning: “If you are a parent or a teacher, or even if you’re just over eighteen, put this book down now!... You will be totally grossed out by it.” Close enough. Text and line art describe forms of “butt life” that lived hundreds of millions of years ago, during the “Crappian,” “Triarssic,” “Jurarssic” and other eras. Among the Inverterbutts profiled is Trilobutt, “a hard, triple-cheeked bottom feeder,” which could grow to “enormarse” proportions; the Stenchtiles include Turdle, which, when in danger “would pull in its arms, legs, neck, and head so it would appear to be just a piece of poo”; and the Buttornithid group features Fartosaurus, “capable of descending on its prey and smothering it whole in a silent but deadly manner.” While some readers will tire of the one-note humor, Griffiths fans will happily snigger their way to the end. Ages 8-12.