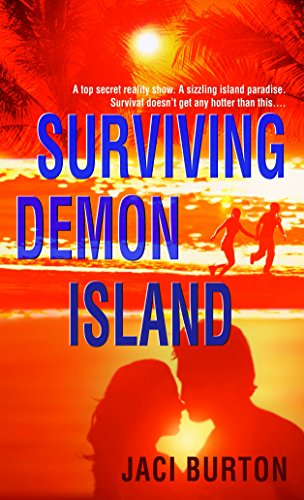 Veteran author Burton returns in fine form with this paranormal romance-adventure featuring tough, tenacious action movie star Gina Bliss. Needing a break from the Hollywood scene, Gina jumps at the chance to join a -like reality television show where the object of the game is to "kill" fictitious demons on an island using martial arts, outdoor adventure skills and high-tech laser weapons. The handpicked cast assembles on "Demon Island" and undergoes rigorous workouts at the behest of sexy, stubbled trainer Derek Marks, whom Gina spars with—verbally and physically—from the get-go. After filming the first episode, a violent attack claims two group members, and the cast's newbies learn that this isn't a game at all: they're the new recruits in a real-life battle between underworld demons (Sons of Darkness) and human good guys (the Realm of Light). Burton has an uncanny aptitude for intertwining the human and the paranormal so seamlessly that sudden demon attacks and labyrinthine underworlds are perfectly believable. Realistic dialogue, spicy bedroom scenes and a spitfire heroine make this one to pick up and savor.