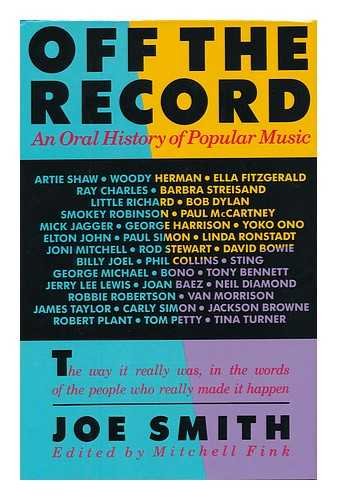 Even readers who do not think of themselves as music lovers will find much to savor in the experiences recorded here of some 220 performers, composers, arrangers, producers and publishers who have played a major role in the music industry over the past 50 years. Smith, CEO of Capitol/EMI records, presents this stunning collection of anecdotes and recollections in an oral history reminiscent of Studs Terkel's Working . The lode he mines is rich. Artie Shaw, for example, comments on performers who allow audiences to retard their growth as musicians: ``Look at Mick Jagger. He's still doing `Jumpin' Jack Flash.' '' Occasional contradictions crop up for the reader to muse on: Lamont Dozier of the Holland-Dozier-Holland songwriting team says of the atmosphere at Motown: ``We . . . literally punched a clock, nine o'clock in the morning. Berry Gordy ran Motown like a factory,'' while Levi Stubbs of the Four Tops says of the same organization, `` There were no set hours to do anything.'' A lL arge number of the interviews reflect on the difficulties associated with sudden fame (Fabian: ``Nobody ever told me it would end'') and the pressure of the continual struggle to stay on top (Del Shannon: ``My manager always used to say to me, `You're only as good as your last hit.' ''). The pervasive effects of racism and drugs on the industry show up in any number of the interviews. Also made clear is a picture of a business brimful with creative, energetic people blessed with entrepreneurial spirit. The sheer scope of the book is astounding. Nearly all the heavy hitters are here, from Lionel Hampton and Buddy Rich to Sting and George Michael, from those whose careers have faded to those who are still producing, composing, performing or hustling after five decades. Virtually all types of popular music are represented: jazz, rhythm & blues, folk, country-western, light pop and heavy metal, so the reader can find Pete Seeger just a few pages away from the Beach Boys' Mike Love, or learn of Gene Autry's influence on guitarist Les Paul. Smith's introductory material, coupled with exemplary editing by Fink, columnist for the Los Angeles Herald Examiner , round out this double- platinum winner. Photos not seen by PW . ( Nov. )
close
Details