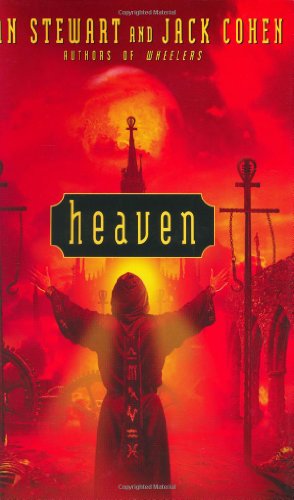 Intellectual playfulness and lively writing propel British authors Stewart and Cohen's second SF novel (after 2000's ), with its exuberant picture of a galaxy full of wildly different intelligent beings. Space is also littered with the potentially dangerous relics of the Precursors, an extinct race whose science was so advanced that it resembled magic. To keep these tools or weapons out of the wrong hands, the church of Cosmic Unity tries to join all races in peaceful cooperation. That's how Servant-of-Unity XIV Samuel sees the situation, even though nomadic Neanderthal star traders and aquatic natives of the planet No Moon distrust Cosmic Unity's methods. By the time Sam realizes that Cosmic Unity's version of heaven resembles a hell designed by Hieronymus Bosch, a lot of suffering has occurred and more is on the way. Since this is basically a novel of ideas, readers will forgive some underdeveloped characters and actions, as the authors focus on big, juicy chunks of extrapolation. Apparently the reverse of the old saying is true: for evil to triumph, it's only necessary for good men to try to do everything. Since that's an unfortunately timely message, the book is not just a satisfying brainteaser but actually might make readers think.