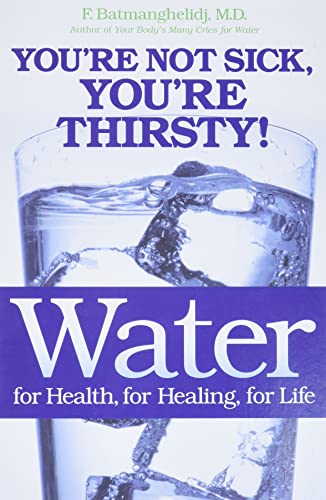 WATER: FOR HEALTH, FOR HEALING, FOR LIFE: You're Not Sick, You're Thirsty

The author, a physician trained in Iran (), not only believes that drinking water is healthy, but makes extravagant claims for its curative powers. He recounts here how he first discovered the healing abilities of water, when he was a political prisoner more than 20 years ago. While incarcerated, he successfully treated with plain water the stress-induced peptic ulcers that afflicted some of his fellow prisoners. According to Batmanghelidj, most people rely on dry mouth to signal thirst and as a result are seriously dehydrated. He posits that symptoms like fatigue, anxiety or depression indicate dehydration, which may result in serious conditions such as asthma, hypertension, brain damage, cancer, constipation, allergies and obesity. In order to compensate for fluid lost through urination, respiration, and perspiration, Batmanghelidj suggests drinking a minimum of two quarts of plain water daily (not alcohol, caffeine beverages or juices). In order to maintain good health, he also advises ingesting half a teaspoon of salt to balance water intake. In addition, a diet consisting of 80% fruits and vegetables and 20% protein should be followed along with an exercise program. To back up his theories, the author presents a wealth of somewhat confusing medical data as well as patient anecdotes that testify to water as a cure for various diseases. Batmanghelidj does state, however, that those diagnosed with specific conditions should not stop taking their medications abruptly, nor should they embark on a water regime until they have consulted with their physician. This controversial program will have the greatest appeal for devotees of alternative medicine.