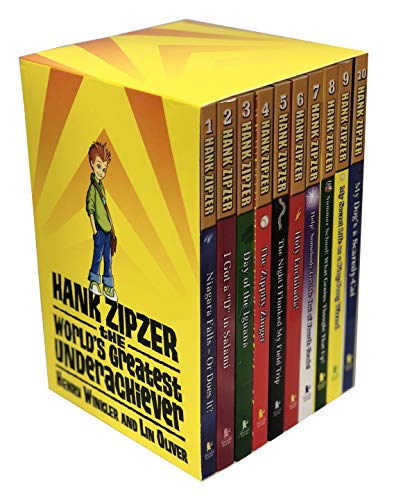 A new series—Hank Zipzer: The Mostly True Confessions of the World's Best Underachiever—starts off with a bang, thanks to these two misadventures of a fourth-grader with "learning challenges." Hank addresses readers directly with a deadpan voice. He lives in New York City with his crossword puzzle–addicted father, a mother who produces such dubious treats as vegetarian bologna at her deli ("Unfortunately for me, my lunch is her laboratory," says Hank), and his sister ("Emily the Perfect") and her pet iguana. When his teacher, Ms. Adolf, assigns a five-paragraph essay on what they did over the summer, Hank feels stymied until he decides to "build" his essay instead—a working model of Niagara Falls—and the plan backfires spectacularly. In the second book, Hank's report card (straight D's) winds up in the grinder for the soy salami that his mother hopes will attract the attention of the city's biggest supermarket chain. It's up to Hank to remedy the disaster. Both tales deftly blend comedy and pathos, and the exploration of Hank's academic struggles is never heavy-handed. The characters are well-drawn, from the endearingly hapless but determined Hank himself to a solid supporting cast that includes Hank's pals, his sympathetic grandfather and his arch-enemy, Nick McKelty (a bully with a head "the size of Rhode Island"). With snappy timing, pitch-perfect dialogue and a wise-cracking delivery, these two tales should attract an enthusiastic readership—not limited to, but certainly including, reluctant readers. Ages 8-12.