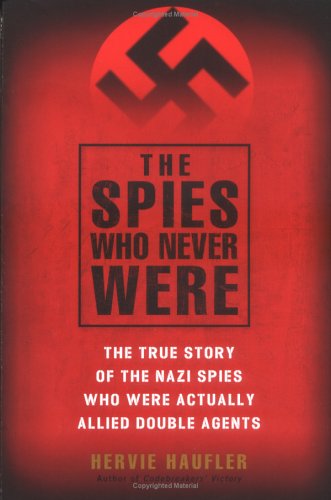 The Spies Who Never Were: The True Story of the Nazi Spies Who Were Actually Allied Double Agents

This compact survey of Allied double agents in WWII begins before the war, when British Intelligence "turned" Arthur George Owens, a Welsh engineer working for the Nazis. Owens's conversion inspired the formation of Britain's Twenty Committee (aka XX or Double Cross), which controlled the messages sent by double agents, as well as the country's systematic policy of using German intelligence agents for deception. As diverse as they were duplicitous, the double agents include Dusko Popov, a Yugoslav said to be the model for James Bond; Eddie Chapman, a British sociopath; Elvira Chaudoir, the daughter of a Peruvian diplomat; and Juan Pujol, a Spaniard nicknamed Garbo for his expertise at disguise. The author portrays these agents and others with a novelist's eye for character and suspense, revealing, for example, that Pujol's wife nearly blew his cover because she was tired of living in wartime England and that Popov might have prevented the attack on Pearl Harbor if not for a personal clash with J. Edgar Hoover. Haufler ( ) is a natural raconteur, and his stories may serve to spark new readers' interest in deeper study of WWII counterintelligence.