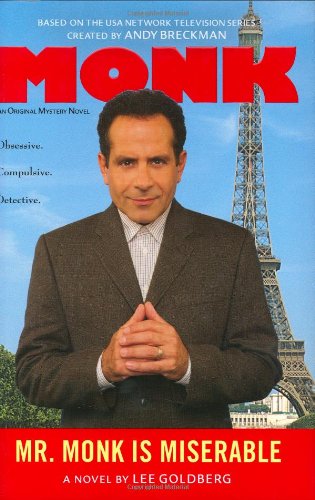 Goldberg's seventh novel based on the popular cable TV series fails to capture the spirit of actor Tony Shalhoub's portrayal of Adrian Monk, the brilliant obsessive-compulsive former SFPD detective traumatized by his wife's unsolved murder. To be fair, so much of the show's humor derives from visual gags that translating the character's fastidiousness and quirkiness into print would be a challenge for any writer. After a trip to Germany to track down his shrink, detailed in (2008), Monk takes a detour to Paris at the instigation of his long-suffering assistant, Natalie Teeger. Like Jessica Fletcher of , Monk can hardly go a day without stumbling over a corpse. En route, he solves the in-flight murder of a fellow airline passenger. Once in Paris, Monk visits a sewer museum, where he notices a fresh skull amid a pile of centuries-old bones. This one's likely to divert only die-hard fans of the TV show.