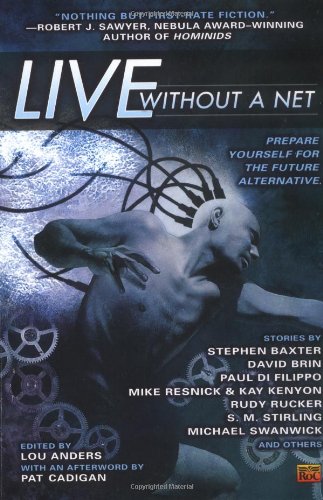 LIVE WITHOUT A NET

Taking a post-Internet, post-computerized world as its unifying theme, Anders's () uneven anthology showcases 18 mostly male British authors (not all of whom will be familiar to U.S. readers), whose contributions range from disconnected, inconclusive pieces to delightful shaggy-dog stories. Most focus on sophisticated biological technologies, such as Charles Stross's provocative "Rogue Farm," about "multi-human beings" and Stephen Baxter's sad little tale about slave-drones and successive revolutions, "Conurbation 2473." Other established names include Michael Swanwick, David Brin, Rudy Rucker and S.M. Stirling. But the longest entry belongs to relatively obscure Brit John Meaney. In Meaney's entertaining novella, "The Swastika Bomb," bioform animals serve as tanks, airplanes, bombs and deadly viruses, against an alternative history of the Battle of Britain in which the Axis and the Allies race to develop a nucleic instead of a nuclear bomb. All the stories are competently written, but few leave a lasting impression.