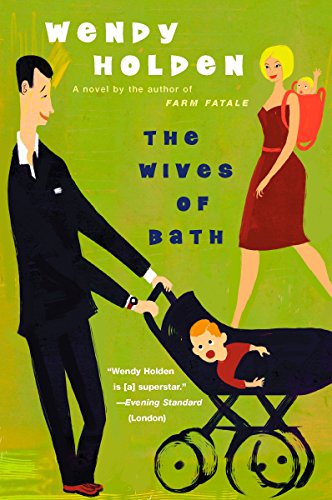 THE WIVES OF BATH

Holden affectionately skewers marriage and parenthood in her latest charming farce (after about two expectant couples who, having fled bustling cities for a slower pace of life, find themselves in the same prenatal class in the small city of Bath, England. Alice, a lawyer, got pregnant after a "one-teatime stand" and impulsively married environmentally conscious Jake, who soon becomes an eco-fascist under the pressures of fatherhood—refusing to bathe, giving away Alice's belongings and insisting they only feed their child stewed organic vegetables. Notorious celebrity journalist Amanda loses her job and decides that a baby will be her latest trendy accessory. But then she lands a new position and her hunky husband, Hugo, a real estate agent, finds himself plunged into fatherhood, left as sole caregiver for a squirming, baffling baby. He turns to down-to-earth Alice for help, and soon the two develop something more than friendship. With crisp, witty dialogue and none of the clunky exposition that hobbles so much chick lit, Holden's book soars above other volumes in the genre and grips the reader with an escalating succession of humorous, diaper-laden escapades.