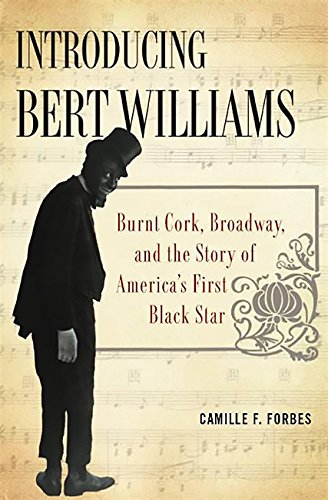 Once billed as “The Funniest Man on Earth,” black comedian Bert Williams (1874–1922), in the midst of a current revival (e.g., Louis Chude-Sokei's and Caryl Phillips's ), gets solidly covered by Forbes, a UC–San Diego professor of African-American literature and culture. She delivers an in-depth documentation of his life set against the shadowy backdrop of 19th and 20th-century racism. Working within the limitations of blackface stereotypes, Williams regaled audiences with his creative characterizations. Born in the Bahamas, he was schooled in California, joining medicine shows and minstrel troupes before teaming with George Walker for vaudeville and Victor recordings. Williams's woeful “Nobody” became his signature theme song, and in 1903, he brought the first black musical to Broadway. When Ziegfeld ignored protests and cast Williams in 1910, his integrated Ziegfeld Follies became a theatrical milestone. Williams “had shown that blacks who break through to 'The Great White Way' can triumph and stay.” Forbes's foray through the Billy Rose Theatre Collection and other archives fills 52 pages of bibliographic notes, and her vivid, detailed descriptions of Williams's comedy routines bring his dynamic stage presence to life on the page.