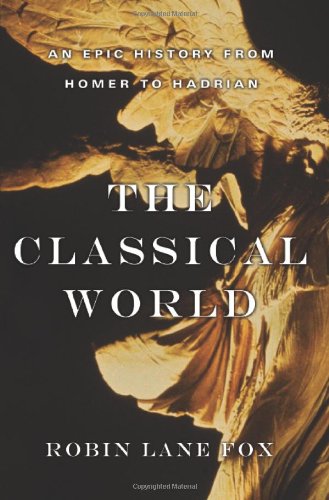 The Classical World: An Epic History from Homer to Hadrian

Framing this history of the classical world as he imagines the second-century Emperor Hadrian (who traveled the classical world and had a "classicizing mind") would have done, this scintillating survey seeks to understand Greek and Roman civilizations on their own terms. Oxford historian Fox ( ) structures his study around the ancient concepts of freedom, justice and luxury, as they evolved from Homeric literature onward. The story arranges itself around two poles: democratic Athens, of which, for all its flaws, Fox is an unabashed partisan, and Rome, whose fatally unequal republic declined into the grotesque tyranny of the early empire. This intellectual framework provides an interpretive skeleton for a loosely structured, well-paced narrative history. (One disappointment, a major one for an "epic history," is Fox's sketchy, montage-like treatment of military campaigns.) Into the story the author weaves insightful passages on art, religion, technology, marriage and the prominent role of homosexuality in classical culture, along with set-piece profiles of statesmen and thinkers from Pericles to Plato to Pliny. Fox is a fluent, perceptive color commentator on the pageant of ancient history, while giving readers some idea of where the parade was headed. 71 b&w illus.; 10 maps.