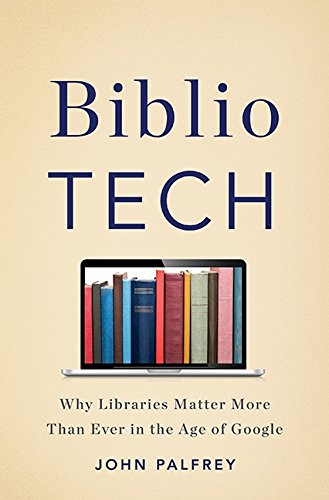 BiblioTech: Why Libraries Matter More Than Ever in the Age of Google

The future of libraries is filled with potential, according to Palfrey, the former director of the Harvard Law School Library and founding chair of the Digital Public Library of America. His new book carves out a strong and exciting vision for libraries in the 21st century, one that maintains the core activities of librarianship (“ensuring access to and preservation of information”), by combining the virtues of the library as a public space situated in a community with the vast networking capabilities afforded by the digital era.

Palfrey, a passionate advocate for libraries, underlines their importance—but make no mistake, his book is not so much an ode to libraries as a stark wake-up call. The question that looms throughout is whether libraries will even continue to exist. To that end, he paints a harsh reality of the crisis currently facing libraries as they “awkwardly” straddle the analog and digital spheres: “on the one hand, the public sentiment that the digital era has made libraries less relevant, and on the other, the growing number of expectations we have for libraries, stemming in no small part from the very digitalization that the public assumes is making them obsolete.”

It’s no revelation that libraries are underfunded and librarians are overworked, but Palfrey believes that in order to solve that dilemma, one must look back to the roots of the library system, when philanthropists endowed them for the public good. “We’ve forgotten how essential [libraries] are,” he writes. “The knowledge that libraries offer and the help that librarians provide are the lifeblood of an informed, engaged republic.”

Palfrey argues convincingly that libraries matter even more in today’s vast information environment than they did in the past. For those unfamiliar with the foundations of librarianship (say, anyone who thinks a librarian’s primary job is putting books on a shelf), Palfrey’s argument helps to move readers beyond the simplistic nostalgia for browsing the library stacks: “The powerful core idea is to focus less on books per se and more on knowledge transfer within a community.” This is far less radical than it sounds—libraries have always facilitated “knowledge transfer” through the books they lend and the collections they build. Palfrey urges readers to shift their understanding of libraries from the physical materials they hold to the activities that those materials promote.

This shift paves the way for Palfrey’s vision of libraries in the future. He illustrates the path forward with examples of the ways community libraries are working with the DPLA to became local hubs in a larger network of knowledge intuitions. His enthusiasm for these projects is contagious. The question that remains is where the money for them will come from, but Palfrey leaves this in the hands of his readers.

Above all else, Palfrey’s book serves as a strong reminder that readers and librarians alike have a stake in the future of libraries. Whether this is enough to motivate readers to pay it forward remains to be seen.

Annie Coreno is a reviews editor at PW. She holds a master’s degree in library and information science from the University of Toronto.