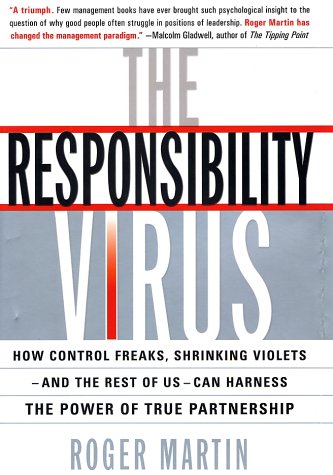 A magazine CEO clashes with his v-p of sales over lagging ad sales. Two married attorneys each try to get the upper hand while house-hunting. A team of managers, intending to collaborate, winds up competing with each other. These are just some of the power struggles Martin, dean of the University of Toronto's business school, presents in this personal and professional self-help book. Both overachieving and underachieving execs will recognize themselves and their colleagues in Martin's realistic, well-sketched (pseudonymous) conflicts, in which ego and fear of failure are presented as major roadblocks to group consensus. His 15 years of consulting experience serve him well, especially when he demonstrates, with specific examples, how most poor decision-making begins at the level of individual behavior. Figures and diagrams abound, likening portions of the book to a Power Point presentation, albeit a useful one. For example, the "Responsibility Ladder" shows the levels of responsibility to which most people gravitate in most situations. At the lowest rung of the ladder, one set of problems is created when folks who fear failure drop difficult projects on other people's desks. Martin is quick to point out, however, that organizational problems can arise at the top of the ladder, too, when managers who seek control "consider options and make [a] decision, informing other [parties] subsequently." Martin wrote this book "to help people avoid the natural predisposition to screw up the handling of responsibility in ways that undermine their goals and well-being," and he succeeds. His examples and nuggets of advice are on-target and entertaining.