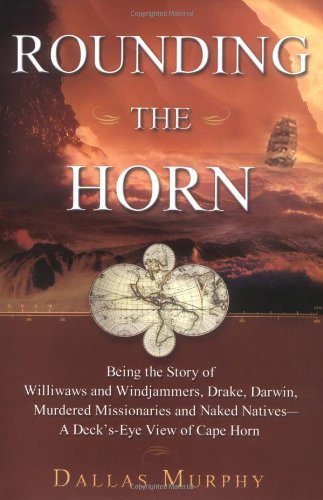 ROUNDING THE HORN: Being the Story of Williwaws and Windjammers, Drake, Darwin, Murdered Missionaries and Naked Natives—A Deck's Eye View of Cape Horn

Even landlubbers may recognize Cape Horn as the Americas' southernmost tip. Between this crag of rock and Antarctica lies the Drake Passage, whose waters are the planet's most consistently violent. Of a trip through these latitudes, sailors warned, "Below 40 South there is no law, below 50 South there is no God." Murphy, a mystery writer and nautical journalist, sailed there from Ushuaia, Argentina, in a 53-foot sloop and carefully points out that he only visited the island rather than sailing around it. He revels in the tales of those who made the entire trip, however, and spends much time vividly recounting their adventures, found in old books with thrilling titles like and . Nautical buffs will find some of these yarns familiar: Darwin's South American voyages aboard HMS were the subject of last fall's , by Peter Nichols, and Murphy's version adds little to the story beyond subtle interpretive differences. Another chapter touches upon the U.S. Navy's South Seas Exploring Expedition, chronicled at length by Nathaniel Philbrick in (also published last fall). Yet such narrative retreads are offset by the details of Murphy's own voyage (his desire to explore almost set off an international incident with the Chilean government). As exciting as Murphy's historical yarns are, it's always a treat to return to him and his crew as they brave the elements at the end of the earth. Maps.