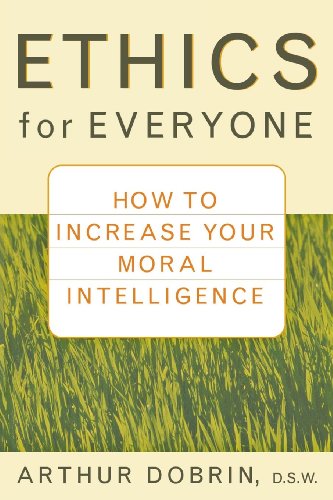 ETHICS FOR EVERYONE: How to Increase Your Moral Intelligence

There are no cut-and-dried answers to the big ethical problems, says Dobrin, a Hofstra University professor and an active participant in the Ethical Humanist movement for more than 30 years, but discussing the issues can give better insight into what's right. After a mercifully brief discussion of various ethical systems, Dobrin sets out some typical ethical quandaries for readers to analyze, helping them establish their own moral IQ. Homework over, readers can relax and follow Dobrin and his guest experts as they navigate a series of provocative moral dilemmas. Should his father consent to heart surgery for his mother if she's succumbing quickly to Alzheimer's? Should an all-boy athletic team have the right to exclude a girl? Should the West Pointer resign rather than betray his friend or the school's honor code? Many readers will have encountered some of these dilemmas themselves, but other situations will be new. Dobrin's willingness to see all sides will encourage readers to think broadly as well; retaking the preliminary quiz at the end of the book, many will find their own ethical perspectives more nuanced and satisfying. This compelling volume and Randy Cohen's (reviewed on p. 87) should both hit responsive chords with the ethically questing. But if Cohen is "everyday ethics" (going back on a job offer; senior discounts), Dobrin, while just as accessive, leans toward big-time ethics (assisting a Lou Gehrig's disease sufferer to commit suicide; telling an adopted child about his or her birth parents).