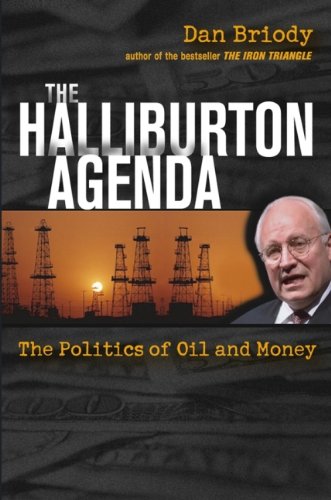 THE HALLIBURTON AGENDA: The Politics of Oil and Money

Following hard on the heels of , an examination of international consultants the Carlyle Group, Briody turns his considerable investigative skills to the rise of the Halliburton Corp., its subsidiary Kellogg, Brown and Root and the transformation of the U.S. military establishment. With a blunt matter-of-fact tone, Briody describes the rise of the two companies from the dusty oil fields of west Texas to the marbled corridors of power in Washington, D.C. Briody contends that Halliburton and KBR have literally bought politicians, manipulated the contracting process and ridden the current wave of small wars to record profits. Small, detailed moments of intense private pressure and unscrupulous backroom deal-making dominate this story. While Briody seethes with indignation, there is a grudging respect for the skill with which the executives and politicians ply their trade and a bitter resignation at the reality of the ways of government contracting. Central to the Pentagon's post–Cold War strategy is outsourcing nonmilitary tasks to private contractors. One of the chief architects of this plan was Dick Cheney, defense secretary for the first President Bush. Briody argues that with Cheney now vice-president and Halliburton awarded a huge no-bid contract to reconstruct Iraq's oil fields, public outrage has grown. As the controversy simmers, Briody raises an important question: with Americans and Iraqis dying by the day, have military matters become so efficient and profitable for companies like Halliburton that war itself is easier to wage? At times the book is repetitive and has the feel of being rushed to press, but this urgency lends the book a certain gravity. Briody has his own agenda—brilliantly illuminating the increasingly crucial nexus of public need, private profit and war making.