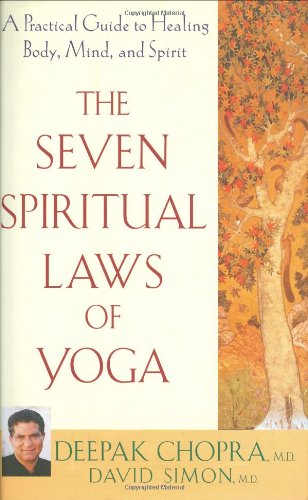 THE SEVEN SPIRITUAL LAWS OF YOGA: A Practical Guide to Healing Body, Mind, and Spirit

"Just as no one would argue that gravity applies only to England because Sir Isaac Newton was British or that Einstein's theory of relativity was relevant only in Germany... the principles of yoga are not limited by time or space," say Chopra, author of and Simon, medical director for the Chopra Center. Their guide is written in such a clear, sensible way that those new to yoga will wonder why they've not tried it before. Seasoned practitioners will find themselves reinvigorated and may learn a new breathing technique or meditation. Starting with descriptions of the two most popular frameworks, Shankara and Patanjali, the authors then list the seven laws of spirituality that neatly correspond to the seven days of the week. Extensive explanations of several types of meditation—chakra, so hum breath technique, awareness, attention/intention—are followed by the most common breathing exercises and thorough instructions for a variety of asanas (poses). Photographs complete the instructional portion of the book, making it especially useful for beginners. The final pages bring the program together with a suggested routine that combines all of the above into a perfect blend of theory and practice.