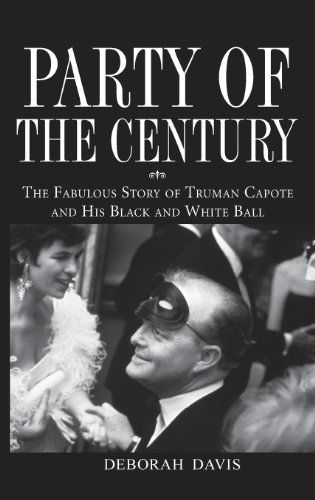 Party of the Century: The Fabulous Story of Truman Capote and His Black and White Ball

Truman Capote's legendary masked ball, at New York City's Plaza Hotel on November 28, 1966, was a hyped-up media event meticulously masterminded by the self-promoting, social-climbing author of . Davis ( ) dishes up the menu, the decor, the outfits and the guest list of 540, clueing the reader in to how Capote dangled the prized invitations for months, snubbing early supporters like Carson McCullers as he determined who was "in" and who was "out." In choosing his guest of honor, Capote eschewed glamorous "swans" like Babe Paley and Marella Agnelli in favor of "dowdy" publisher Katharine Graham. Actress Candice Bergen was bored at the ball; Capote's elevator man danced the night away with a woman who didn't know his pedigree; and Norman Mailer sounded off about Vietnam. This frothy effort retreads ground already covered by Gerald Clarke, George Plimpton and Sally Bedell Smith, among others. Black-and-white photos have frozen the beautiful people of the '60s in all their preening glory, and readers also get to see the invitation and the fashion sketches of the elaborate masks and headdresses created by Halston and Adolfo.