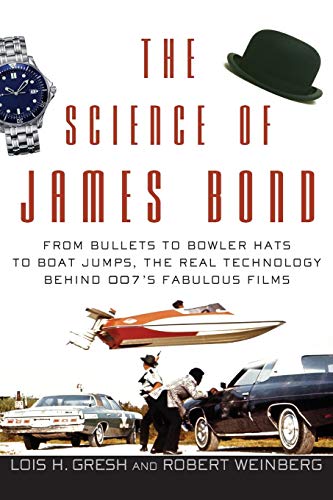 The Science of James Bond: From Bullets to Bowler Hats to Boat Jumps, the Real Technology Behind 007's Fabulous Films

Everyone knows which secret agent drives a car that turns into a boat at the flick of a switch, leaves fake fingerprints and, of course drinks his martinis shaken, not stirred: Bond. James Bond. Gresh and Weinberg, having surveyed the science of supervillains and superheroes, turn to Bond and all the wonderful toys conjured up for him by Q, as well as the weapons created by his enemies. They explain how "dirty bombs" work while noting that Goldfinger's plot to contaminate Fort Knox with one wouldn't work, because the radiation would turn gold into liquid mercury. Biological agents were also used by one of Bond's foes. Fortunately, Hugo Drax's scheme to destroy humankind with a poison made from orchids was fairy tale stuff. Gresh and Weinberg's book goes up against last year's by Barry Parker,, but they write better and their book is more accessible to Bond fans who've forgotten their high school science. Readers might check out the appendix on the Bond martini first, so they'll have something to sip while enjoying this lively read.