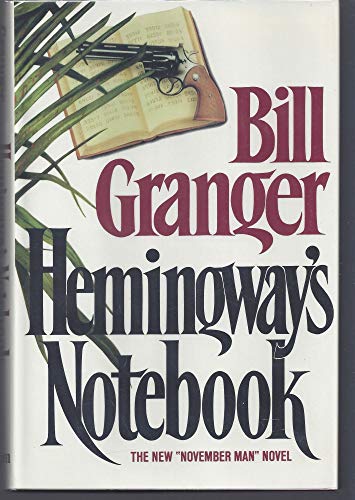 Twenty-five years ago in Cuba, Harry Francis played prankish games with Ernest Hemingway while working for the CIA. Now Harry lives and drinks on the Caribbean island of St. Michel, where rebels in the hills fight the government and where another former agent, Col. Ready, heads the army. Harry is rumored to have a notebook from his Cuba years that confirms the extent and stupidity of CIA involvement in the Bay of Pigs debacle. The CIA wants the notebook, as does R Section, a group set up by Kennedy in '61 to ""watch the watchers.'' Ready wants the notebook too, and flushes another ex-agent, code-named November, from hiding, coercing him into going after it. The CIA, arm-in-arm with organized crime, launches an invasion of St. Michel by paramilitary exiles. November finds the notebook; R Section watches. Using them all to his own ends, Ready is a master player. But so is November, who needs to outplay the opposition to save the woman he loves. Truth, fiction and history peel in layers. Grainger, author of The November Man, has been compared to le Carre, Ludlum and Fleming. But this lean, suspenseful tale, peopled with compelling characters, has a drive and signature all its own. January 15
close
Details