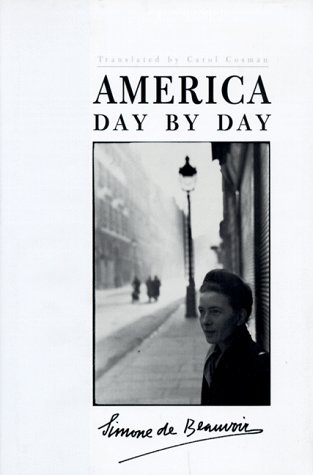 It has been a good year for the French existentialist and feminist, with the recent publication of de Beauvoir's love letters to Nelson Algren and now this account, published in the U.S. for the first time, of her four-month tour in 1947. De Beauvoir can be facile and condescending, as when she compares the ""strained coldness of white American women"" to ""lively"" black women, or writes: ""And when you see these men dance, their sensual life unrestrained by an armor of Puritan virtue, you understand how much sexual jealousy can enter into the white Americans' hatred of these quick bodies."" Often, however, de Beauvoir is more clever and subtle: ""I sense that America is hard on intellectuals. Publishers and editors size up your mind in a critical and distasteful way, like an impresario asking a dancer to show her legs,"" she writes, and elsewhere, ""Los Angeles is vast but porous. [Chicago] is made of a thick dough, without leavening."" De Beauvoir's itinerary, set by lecture dates, is a bizarre combination of the banal (hotels, drugstores), tourist traps (Niagara Falls, the Grand Canyon, Las Vegas) and the dark underbelly of slaughterhouses, drug addicts and Bowery bums. But she inevitably returns to the same themes: black/white relations, political commitment and comparison of the U.S. and France. While she mentions Algren by initials, de Beauvoir gives no inkling of her passionate interest in him, attesting to her ability to compartmentalize romantic and intellectual pursuits. There is a natural cerebral quality to this book that prevents it from becoming ponderous. It will easily attract those interested in de Beauvoir, travel writing and the intersection of American intellectual and popular culture in the postwar years. First serial to Conde Nast Traveler. (Jan.) FYI: The New Press has published de Beauvoir's letters to Algren as A Transatlantic Love Affair (Forecasts, Sept. 7).
close
Details