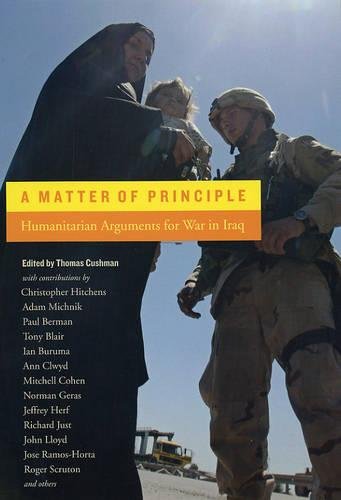 Before the U.S. and its allies invaded Iraq in 2003, there were writers and thinkers who distrusted Bush but favored the war largely on human rights grounds: members of that contingent recall, defend and re-examine their arguments in this meaty, provocative, if often academic, collection. "Had there been no war," editor Cushman (a professor of sociology at Wellesley) points out, "Saddam Hussein would still be... torturing and killing." Many contributors make that claim their bottom line. Several explain why they thought the war just in principle, without defending it in practice: "If I knew in spring 2003 what I know now," says the historian Jeffrey Herf, "I would not have supported the invasion." Other writers do not so much defend the war as attack glib arguments against it: magazine editor Mitchell Cohen denounces "all-explanatory dogma" from right or left; British philosopher Daniel Kofman denounces "confusion in the antiwar movement." Philosophers and political science professors take up the theories of Immanuel Kant and John Rawls. Europeans, including Nobel Peace Prize winner Jose Ramos-Horta, denounce reflexive anti-Americanism; onetime Polish dissident Adam Michnik explains his "very strong... support for the war" in a revealing interview. Strongest of all in their rhetorical force are a pair of speeches from Tony Blair, the last two of the volume's 24 entries. Though it will change few minds, Cushman's volume may include the most articulate support yet for America's Iraq adventure—even if some of its voices express second thoughts.