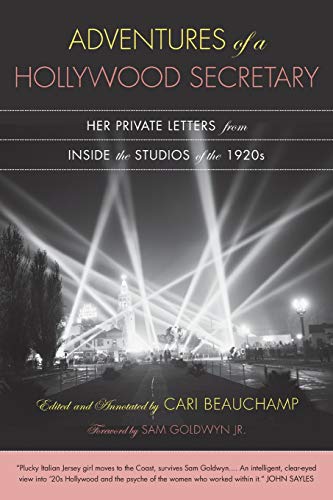 Adventures of a Hollywood Secretary: Her Private Letters from Inside the Studios of the 1920s

Those who, like Valeria Belletti, worked entry-level jobs in early Hollywood had ringside seats at one of the country's most happening scenes. Belletti, the daughter of Italian immigrants, worked as a secretary for Samuel Goldwyn and Cecil B. DeMille from 1925 to 1929 and this volume presents her naïve letters to a friend back home in New Jersey. Alas, her missives read like a young girl's diary (Belletti was in her late 20s), not a savvy view of Tinsel Town. Despite Belletti's proximity to the rich and powerful—Rudolph Valentino and Gary Cooper, to name two—her musings are remarkably chaste by 21st-century standards. All she can muster for Goldwyn is: "I don't particularly like him, but he's no worse than the others." Although she hints at tawdry interludes—star affairs, scandalous deaths, studio shenanigans—she refuses to reveal anything of substance. Editor Beauchamp, an Emmy-nominated documentary film writer, interjects commentary throughout, contextualizing the events Belletti relates. But dispatches on Belletti's outfits for movie screenings and details on her dates ("We had real champagne.... It was a case of love at first sight") don't make for scintillating—or even enlightening—reading. Only readers with an ardent interest in the period will find these letters of note.