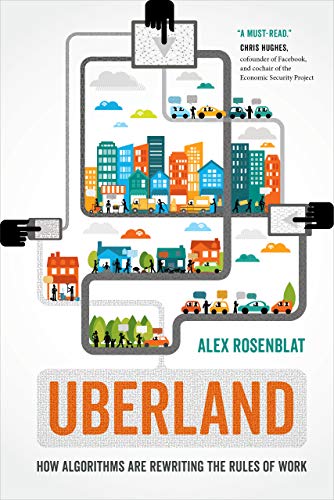 Uberland: How Algorithms Are Rewriting the Rules of Work

This revelatory study by technology ethnographer Rosenblat, of New York City’s Data and Society Research Institute, explores “how Uber and other corporate giants in Silicon Valley are redefining everything we know about work in the 21st century through subtle changes ushered in by technology.” Rosenblat, who spent almost four years using Uber and interviewing its drivers and staff, makes clear that, contrary to the ads promoting Uber as a “pathway to the middle class for anyone who wanted to drive,” ride-sharing service drivers must struggle to make such work profitable. Uber, she posits, has treated those drivers as “end users of its software, rather than as workers,” a posture that has exempted the company from some regulations governing employee rights and cheated workers out of money they’re owed, including by not crediting tips to them. More broadly, Rosenblat argues that the “sharing economy popularized wider changes to work culture by conflating work with altruistic contributions... devaluing work itself” and that “we are all being played by the technologies that have become commonplace, because, simply put, we want to use them.” This jargon-free and intriguing exposé offers food for thought for anyone interested in worker protections or societal changes driven by technology. Agent: Lisa Adams, Garamond Agency. (Oct.)

Correction: An earlier version of this review mistakenly referred to the author as a male.