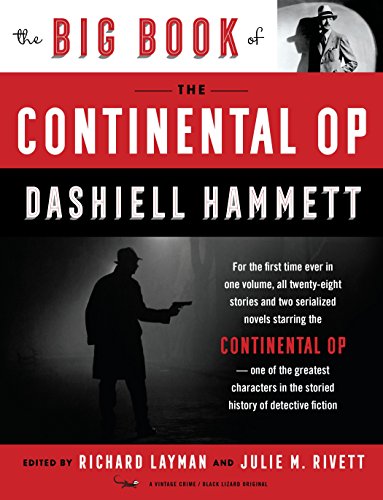 The Big Book of the Continental Op

In San Francisco in the 1920s, Dashiell Hammett carved out his reputation as the father of the hard-boiled American detective story with a wildly entertaining series about a short, fat, nameless operative for the Continental Detective Agency. Throughout 28 short stories and novelettes and two full-length novels, the Op never told readers his name. And they didn’t care. Whenever the “fat shorty” yanked out his roscoe, you knew action—and more than one moment of hysterical humor—would fly. The casework was pulled from memories Hammett had of the job he’d just left, sleuthing across America for Pinkerton’s National Detective Agency. From wandering-daughter jobs and embezzlement to kidnapping and murder, the tough little Frisco gumshoe faced it all.

Now, for the first time, the complete adventures appear in one place, drawing on the original text from the pulps. Every previous edition either misses some stories or features exploits cut to shreds by editorial blue pencil. And this hefty volume reprints, for the first time since they appeared in the pages of Black Mask magazine, the original serial versions of the novels Red Harvest and The Dain Curse (when Alfred Knopf did them in hardback in 1929, he asked for lots of changes—Harvest had too many dynamitings).

The current editors do intrude with occasional footnotes explaining period slang (really, who doesn’t know a gat is a gun?) and make the glaring misstep of breaking the contents down by the three Black Mask editors (ending with Joseph Shaw, the editor last in line, who is now a legend for nudging the former detective toward novel-length work). Obviously, Hammett’s incandescent talent is the major factor, not the editors. Each editorial “period” has weaker efforts and then its triumphs—the earliest stories in 1923 are feeling their way, but by “Zigzags of Treachery” the work is top-notch. In 1924, “The Girl with Silver Eyes” and “The Whosis Kid” scorched the typewriter keys, but the pulpster still stumbled with “Creeping Siamese.” The final two Continental Op stories published under Shaw, and The Dain Curse, seem to show a writer grown tired. Maybe he was ready to move on—he had enough gas in the tank to create Sam Spade for The Maltese Falcon and conjure up Nick and Nora Charles and Asta for The Thin Man.

You don’t need the ponderous and academic to explain the fun away. Few reading experiences equal going through the Ops in order, so knock yourself out. (Dec.)

Don Herron has led the Dashiell Hammett Tour in San Francisco for 40 years and is the author of Willeford, a biography.